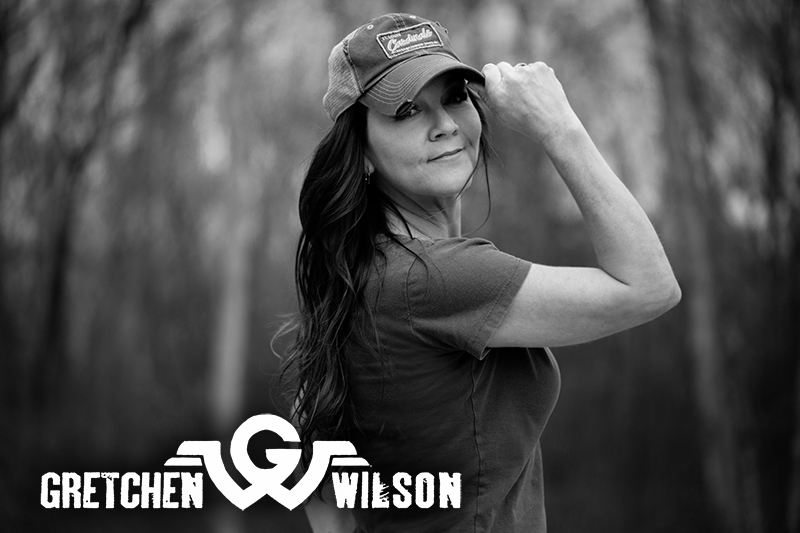 To all appearances, Gretchen Wilson went overnight from talented obscurity to phenomenon. Her meteoric rise, the kind experienced by only a handful of artists in the past few decades, was that rare instance where talent and moment meet to form a cultural tidal wave.

Gretchen's ability to tailor songs as gorgeously rough-edged as she is, have given her the kind of "I am what I sing" originality few women in music history-- Loretta, Janis, Dolly and Cher chief among them--have ever been able to achieve.

Her first single, Redneck Woman, spent six weeks at #1. Her debut album, Here For The Party, sold more than five million copies... and spawned three more top 5 hits including, “Homewrecker,” “When I Think About Cheatin’,” and the title track, “Here For The Party.”

Her second CD, All Jacked Up, saw four more hit songs like “California Girls,” “I Don’t Feel Like Loving You Today,” and “Politically Uncorrect” (featuring Merle Haggard) ride enthusiastic reviews to platinum status, and her third record, One of the Boys, solidified her position as one of contemporary music’s most original and multi-faceted female artists.

Since her debut, she has been featured on “60 Minutes,” “Dateline NBC,” “20/20 Primetime,” CNN’s “People In The News,” and she has appeared on virtually every morning, noon and late-night television show on the air.

She has won across-the-board awards including ACM’s, CMA’s, AMA’s, Billboard’s, and is a Grammy winner, and nine-time nominee. Her first book, the autobiographical “Redneck Woman: Stories from My Life,” landed her on the prestigious New York Times Best Seller List.

Until recently, Gretchen was one of the millions of Americans who hadn't finished high school. A dedicated mother, it was important for her to earn her diploma not only for herself, but to prove to her daughter just how important an education is. At the age of 34, Gretchen received her G.E.D. Her friend and mentor, fellow musician Charlie Daniels, was a guest speaker at her graduation ceremony.

She has since become an advocate to help spotlight the funding needs of adult education programs and the adults on waiting lists hoping to further their education. She has spoken to a Congressional subcommittee about the need for continued funding and has been awarded the National Coalition for Literacy Leadership Award, which recognizes individuals and/or organizations that have made extraordinary contributions to improving literacy and raising awareness of adult literacy in the United States.

After much soul-searching, prayer and consultation, Gretchen left her original label home in July 2009 and launched her own label Redneck Records two months later. Gretchen produced her first album, I Got Your Country Right Here, with John Rich and Blake Chancey. It hit stores in March 2010 and debuted at #6 on the album chart. “Work Hard, Play Harder” and the Grammy nominated “I’d Love To Be Your Last” were among other tracks listed.

"When it comes to my career," she says, "I get involved on a personal level in everything that counts. I'm involved in the writing, recording, producing, mixing, merchandising, and promoting of the music, as well as the touring side, and I couldn’t be happier about it”.

In 2013 Redneck Records released three separate albums that covered everything from traditional country music and classic rock, to holiday favorites. The first of the three albums was entitled Right On Time. The debut single, an original from Gretchen called “Still Rollin’,” was a song she says is about her relationship with her fans and the road. A Night Under The Covers was the second release and included many of classic rock’s most memorable hits from the 1970’s. Faces, Journey, Van Morrison and Cheap Trick were just a few of the influences on this record. Gretchen released her first full Christmas album the fall of 2013 that featured traditional Christmas music as well as fun sing-a-longs like “The Hippopotamus Song!”

In 2014, Gretchen celebrated the 10-year anniversary of her record-setting Here For The Party album by releasing STILL Here For The Party, a live CD and Bluray/DVD recorded in front of a packed house at The Pageant nightclub in St. Louis.

Following some crazy years of writing, recording, releasing new music and touring, Gretchen made the difficult but easy decision to take a break. The difficult part was breaking the news to her large and dedicated fan base, but the easy part was taking a long hard look within the walls of her home and knowing her priority needed to be with her teenage daughter Grace.

“I took a few years off, mainly because I’m a single mom and my daughter was at that critical teenage place in a girl’s life where I needed to be less Gretchen Wilson and more Grace’s mom,” Gretchen recently told Taste of Country. “It’s the job I was appointed first and I think it’s the most important job that any person has, is to raise our children… I had a really tough childhood and just about as tough if not tougher 20s, so I think it’s safe to say she saved my life. Every moment of my life since the minute she’s come into my world has been for her. She’s made me a better person. She was a total game changer.”

Back in the saddle, Gretchen released the 12-song Ready To Get ROWDY album in June of this year. “Listening to this record in its entirety will make you believe good ol’ Country Music hasn’t gone anywhere,” said Gretchen, who co-produced the album with Blake Chancey. “These 12 songs are as ‘Gretchen Wilson’ as I get. The Redneck is back!”

Kid Rock joins Gretchen on the Bluesy, horn-backed, vocally soaring “Bad Feeling.” The friendship of the two dates back to 2004, when he and Hank Williams Jr. appeared in Gretchen’s “Redneck Woman” video. Powerhouse singer Wes Hightower lends backing vocals on several songs on the new album.

Gretchen hit the road for a nationwide summer tour – her first in three years –that took her from Florida to Michigan and from New York to California. The Loving Mary Band, which performed with Aerosmith’s Steven Tyler on his most recent tour, backed Gretchen on most of her dates.

And as the latest chapter in her life is still being written, this head of a major business enterprise, focal point of a touring company, and major modern mom, has come a long way, in both her personal and artistic lives. It has been an adventure. "I feel like I've grown so much spiritually, emotionally and professionally in the last couple of years," she says. "Everything has evolved and I'm more in the moment now than I used to be.